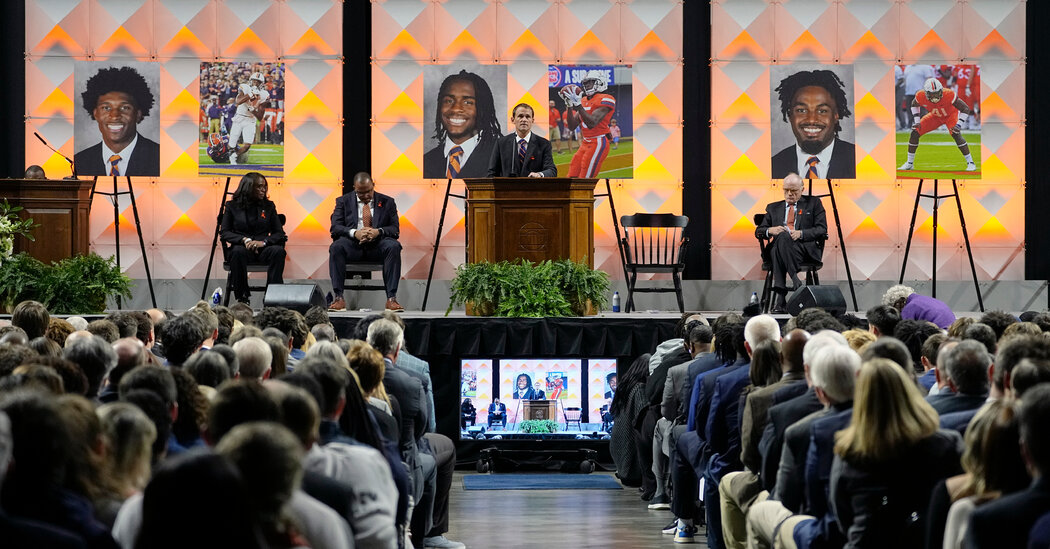 The crowd laughed as Elijah Gaines, a cornerback on the team, told stories about how much Mr. Davis had loved his hometown of Ridgeville, S.C., “making it sound like it was ‘the biggest city of the world.’” Mr. Gaines recalled the time when he spotted a “187” tattoo on Mr. Davis’s arm and asked him if that was the Ridgeville area code. “No, it’s my exit,” Mr. Davis said, referring to the highway off-ramp in that town.

Dr. Williams, relaying stories told to her by the students’ relatives, described a video of Mr. Chandler as a 10-year-old dancing in a parking lot by himself. “His rhythm was suspect, but his confidence was never in doubt,” she said. About Mr. Davis, she said that he always went to church when he visited his family and insisted on sitting in the first row despite his 6-foot-7 frame, so he could be sure he heard every word. And Mr. Perry, who donned a red Power Ranger costume for Halloween as a child, “didn’t take it off until after Thanksgiving.”

The service came at the end of a violent week for the nation’s universities. Four University of Idaho students were fatally stabbed in a house near the school’s campus in the city of Moscow in the early morning hours of Nov. 12. No suspects have been arrested. And on Saturday, authorities in New Mexico were investigating the killing of a 19-year-old man earlier that afternoon on the campus of the University of New Mexico in Albuquerque.

The Charlottesville service itself was held amid a threatening email related to the event that school officials said they received around midday. But the police said they implemented enhanced security measures at the arena, and the program proceeded without a disruption.

Throughout the week, other University of Virginia sports teams honored the fallen players: The basketball team warmed up with shirts that bore the victims’ last names. and the swimming and diving teams marked their bodies with the players’ uniform numbers: 1, 15 and 41.

Saturday was supposed to be the football team’s final home game of the season against Coastal Carolina, but the game was canceled on Wednesday. In a show of solidarity, former University of Virginia football coaches now at other schools — including Robert Anae and Jason Beck at Syracuse University, Nick Howell at Vanderbilt and Kelly Poppinga at Boise State — stood out on the sidelines of their own games wearing Virginia football attire instead of that of their own universities.

On an episode of his weekly podcast that aired on Friday night, the former Virginia football coach Bronco Mendenhall was joined by current Virginia coaches in grieving the team’s loss.