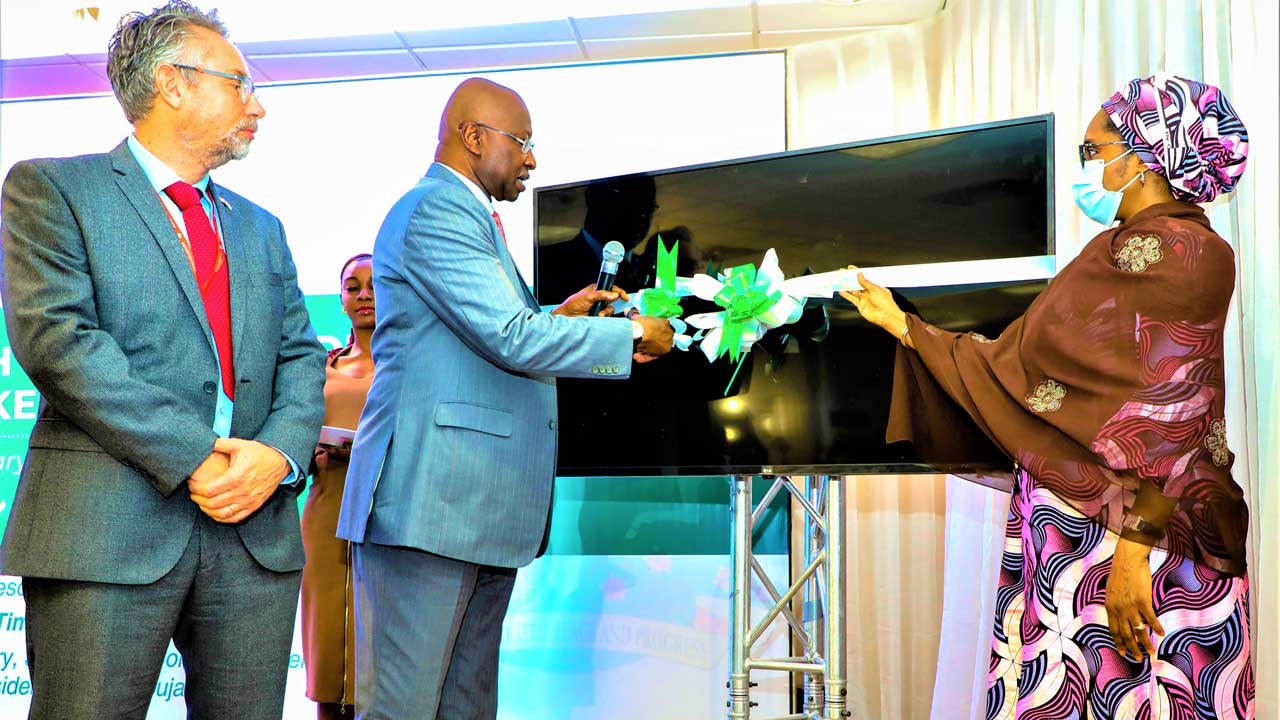 To improve participation and integration of citizen’s feedback in the performance management system of government, the Central Delivery Coordination Unit (CDCU) in the Office of the Secretary to the Government of the Federation has launched the Presidential Delivery Tracker app and website.

The Secretary to the Government Of The Federation, Boss Mustapha, speaking at the launch of the app and website, said over the last two years, the CDCU has successfully driven Federal Government’s delivery initiative to incorporate a systematic feedback mechanism from the citizens into the design and operationalisation of its Performance Management System.

“This is in recognition of the critical roles of the citizens in promoting inclusive and citizen-centered governance. The CDCU was setup to track, review and periodically report to the President on performance of Ministries in the delivery of the ministerial mandates signed by Ministers and Permanent Secretaries with the President in 2019 towards the achievement of the nine priorities of the Federal Government of Nigeria.”

According to him, the Presidential Delivery Tracker (PDT) App was therefore a co-creation platform that aims to connect citizens to governance in Nigeria by increasing citizens’ access to the Federal Government’s presidential priority policies, programmes, and projects through incorporating citizens as the third layer of reporting to offer vital information that will facilitate effective service delivery.

“The PDT is not designed to cover all activities of the Federal Government but is restricted in scope to the policies, programmes and projects implemented by Federal Government Ministries, Departments and Agencies towards the achievement of presidential priority programmes such as the nine priority areas of the current administration.

“The objective of developing the Citizens App and the website is to make it possible for citizens to, among others: report accurately and provide feedback on the implementation of Government programmes and projects; participate in the coordination of Federal Government interventions in their localities and in the implementation of Government projects; highlight critical issues regarding government programmes and projects that hinder the delivery of key services to citizens; advocate and sensitise other citizens and stakeholders on their civic responsibilities by encouraging the use of the citizens feedback platform to hold Government accountable; and become partners in progress with government in the delivery of quality services to all citizens.

“It is important to state that the tracker was robustly designed to allow citizens to report on the presidential priority projects and programmes in their environs being implemented by the government. It also provides the opportunity for citizens to provide assessment on the level of implementation. This will enable the CDCU to triangulate the feedbacks from citizens with reports obtained from the implementing Ministries.”

He maintained that citizens’ engagement initiative is in line with increasing global demand by civil society and citizens to actively participate in public decision-making, and the desire among many governments to improve trust, engender inclusiveness and responsiveness to citizens’ needs.

“This has been strengthened by the rise of innovations in technology which provides citizens with new and unprecedented opportunities to directly engage policy makers to facilitate closing the “feedback loop” between citizens and governments. The whole essence is to enhance the participation of people in local decision-making processes in a sustainable manner, which goes beyond listening to people but to make the development process and institutions more inclusive.

“As we are all aware, citizen engagement allows us to broaden the development dialogue to include the views and perspectives of traditionally marginalised groups leading to more inclusive institutions – governments, development organisations, and donor agencies alike. Hence, the expected outcome will be the most sustainable results, when citizens become active agents rather than passive recipients.

“The CDCU intends to empower citizens to make their voices heard, build citizens engagement programme that work, and participation that increases benefits if discussed with the people, since citizens are strongly driven by psychological and intangible factors, such as trust as well as, a sense of civic duty and belonging.

“The Presidential Delivery Tracker and CDCU website will serve as means of disseminating information on public service delivery to the citizens, receive feedbacks from the populace, and identify/suggest ways of improvement. It will also foster citizens’ voice, discussion, and debate to demand for service improvement.

“In a democratic nation like ours, it is imperative for our citizens to know their rights and obligations and to demand and access quality services through the instrumentality of government. This will not only promote effective project implementation, instill a desire for high standard, but also deepen accountability and transparency at all levels and stimulate continued policy dialogue and strategic engagement among all stakeholders.”

Mustapha appealed to stakeholders, especially the CSOs and the media, to further the engagement by promoting and creating awareness about the platforms so as to have wider reach across the country, stating that the platform will serve its intended purpose when citizens effectively utilise them as expected. “We therefore assure our stakeholders and indeed the general public that feedbacks received from both platforms would be given the deserved attention.”

Also speaking at the event, Development Director, Foreign and Commonwealth Development Office in Nigeria, Christopher Pycroft, said the Presidential Delivery Tracker represents an important step in the transparency and accountability of government business.

“The United Kingdom has been a strong ally of the Nigerian government efforts to improve transparency and accountability. The delivery tracker is an important incentive and should be encouraged across the three tiers of government. It’s important that citizens not only provide feedback on the implementation of government projects but that citizens can demand actions if projects are not delivered.

“Officials and contractors should face sanctions or costs if programmes are not implemented, it’s important that prior to project implementation citizens are an integral part of programme conception and that government projects reflect the need of its citizens, this is critical for building the social contract between citizens and government.”

He noted that citizens’ participation in governance ensures that there’s an explicit understanding that the government will deliver essential services and in return citizens will perform their civic duties.

“An effective social contact is essential for a system of mutual accountability where citizens demand quality services, where politicians and officials strive to meet those demands and where citizens hold those responsible to account through mechanisms such as this delivery tracker where things go wrong. Improve basic service delivery builds public trust and encourages citizens to contribute to society by paying tax.

“At this critical point in Nigeria’s history, public trust is an important component of Nigeria’s democracy building. If well implemented and sustained, the President Delivery Tracker could be a powerful tool for building a constructive engagement with citizens. That said its important to recognise some of the challenges that we face, increase citizens participation in project managing creates expectations, the government must live up to the expectations or suffer the distrust of citizens, the government must demonstrate that  active citizen’s participation will result in a positive state response.”

Pycroft suggested that to sustain the initiative, the government must invest in building partnerships with networks of civil society groups across the country, without the institutional presence of government consistent information and civil society networks citizens engagement could wither away.

“This initiative aligns with the open government partnership principles of improving transparency, accountability, citizen’s participation and responsiveness through technology and innovation. As we approach the period of election airing and political transition, there is a risk that this initiative including the performance management systems could be jettisoned. Institutionalization of this initiative and demonstrating its effectiveness will be critical for sustainability. Let me end by commending the Office of the Secretary to the Government of the Federation for their focus on improving the public sector performance management systems.

“We hope that the Presidential Delivery Tracker will encourage greater government, citizen partnership and shared understanding of how to improve governance in Nigeria. For our part, the United Kingdom government will continue to support incentives that promote citizen participation in governance, openness and transparency and effective social contract based on mutual accountability.”

On her part, Nigeria Co-Chair (civil society), Open Government Partnership, Obialunanma Nnaobi-Ayodele, disclosed that a number of thematic organisations have been a part of designing and reviewing this tracker, so they are very delighted that the innovative project will now be available for use by the public.

“As already stated, this app will track delivery of project across nine priority areas all very closely aligned with the commitment co-created by government and non-state actors in the national actions plan 1, completed in 2019, National action plan 2, in the final stages of implementation and national action plan 3, which is currently being finalised since President Buhari signed Nigerian on to the open government partnership initiative in 2016.”

According to her, the Presidential Delivery Tracker and web application speaks to core types of open governance, accountability, transparency, improved public service delivery, citizens’ engagement and participation in government through the use of technology.

“On our part of civil society, we commit to continue to work together with the government to see that the values for which this project was conceived are delivered, while continuing to hold the government accountable to its responsibilities. Some of the tangible result we would like to see from the use of this application would be results that reflects that the measure of transparency of government, so to what degree does this app enhance disclosure and we would like to see the measure of trust, to what degree do citizens trust that their engagement with this app will translate to positive outcomes.”