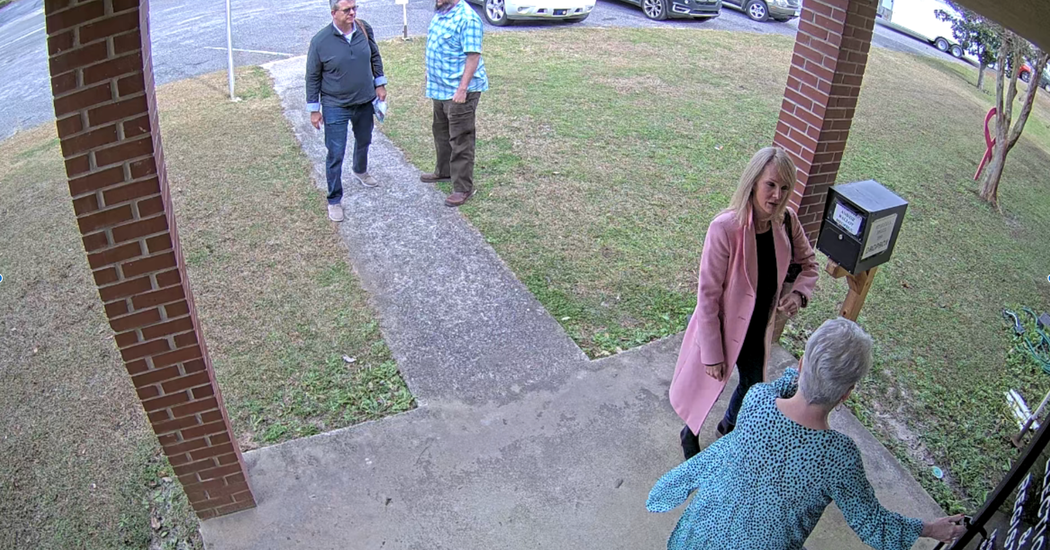 The video footage reflects just how many pro-Trump activists descended on the county, roughly 200 miles southeast of Atlanta, in an effort to find anomalies that would help them challenge Mr. Trump’s narrow loss in Georgia.

And it raises new questions about how many individuals and groups gained access to the county’s voting software, a data breach that is under investigation by the Georgia Bureau of Investigation and is one of a number of similar incidents coordinated by Trump allies in various swing states.

Legal experts say that state investigators are most likely exploring whether Georgia laws were violated, including laws specifically barring access to voting equipment. More broadly, the breaching of numerous election systems around the country raises questions about their vulnerability to being hacked in future elections.

Scott Hall, an Atlanta-area Trump supporter and bail bondsman, has said that he and a team that traveled to Coffee County “scanned all the equipment, imaged all the hard drives and scanned every single ballot.” Plaintiffs in a long-running lawsuit over election security issues in Georgia say the breach allowed access to voting system software used in all 159 counties in the state.

In addition to showing people who were previously known to have been involved in the breach, the video footage shows that the elections office was also visited by a consultant who is under investigation for a similar incident in Michigan and by the conspiracy-minded head of a cybersecurity company involved in a much-criticized partisan recount in Arizona.

Other footage shows the chair of the Coffee County Republican Party appearing to welcome into the building the members of a forensics company hired by Sidney Powell, the pro-Trump lawyer and conspiracy theorist.

The existence of the videos, which were reviewed by The New York Times, was originally reported on Tuesday by The Washington Post and other news outlets.

In the days after the November 2020 election, Trump supporters apparently saw Coffee County, where the annual Gopher Tortoise Festival usually qualifies as a major event, as an ideal place to gather intelligence on what they viewed as potential voting irregularities.

On Nov. 11, members of the local elections board sent a letter to the Georgia secretary of state, Brad Raffensperger, alleging that they had found “deficiencies” in the state voting system set up by Dominion Voting Systems, a frequent target for unfounded conspiracy theories promulgated by Mr. Trump’s allies.

Mr. Hall, the bail bondsman, has said that he and others were invited to the Coffee County elections office in January by local elections officials. Another Georgia Trump supporter, Shawn Still, pointed to other discrepancies in an electronic recount in the county as part of a lawsuit he filed soon after the election. In it, he argued that the recount discrepancies were sufficient grounds for contesting all of Georgia’s election results.

Mr. Still eventually withdrew the lawsuit, and months later, state elections officials determined that the recount discrepancy he had cited was the result of human error by the local elections staff.

Previous reporting has established that Mr. Hall and employees of an Atlanta data company, SullivanStrickler, visited Coffee County to copy its election data on Jan. 7, 2021, the day after Trump partisans violently attacked the U.S. Capitol.

Fani T. Willis, the district attorney in Fulton County, Ga., mentioned the Coffee County data breach in recent court documents seeking Ms. Powell’s testimony before the Atlanta special grand jury that is leading a criminal inquiry into the efforts by Mr. Trump and his allies. Ms. Willis has said she is considering bringing a racketeering or conspiracy case that could involve a number of defendants who were involved in myriad efforts to help Trump overturn his loss in the state.

The new video footage shows Cathy Latham, the chair of the Coffee County Republican Party at the time, in front of the office on Jan. 7 welcoming Mr. Hall and Paul Maggio, an executive with SullivanStrickler, which was hired by Ms. Powell to go to Coffee County.

Ms. Latham was one of 16 Georgia Republicans who signed up as fake electors pledging the state’s electoral votes to Mr. Trump; all of them have been named as targets in Ms. Willis’s criminal investigation. Among them are Mr. Still, who is the Republican nominee for a State Senate seat.

In court documents, legal representatives for SullivanStrickler described Ms. Latham as “a primary point of contact in coordinating and facilitating” the company’s work in Coffee County, saying she “was on site in the Coffee County elections office that day while the work was performed.” The documents were filed as part of a long-running federal lawsuit by government accountability groups who are concerned about the security of Georgia’s elections system.

In a deposition as part of the lawsuit, Ms. Latham said she had been in the office after about 4 p.m. The video footage puts her in the office shortly before noon.

The new video also shows that the office was visited on Jan. 18 and 19 by Doug Logan, the chief executive of Cyber Ninjas, the company best known for conducting the widely derided partisan audit of the November 2020 vote in Maricopa County, Ariz., which ended up showing that Mr. Biden had received more votes there than previously thought.

Also seen entering the office with Mr. Logan was Jeffrey Lenberg, a New Mexico-based consultant who, along with Mr. Logan and others, is under investigation related to a similar incident in Michigan. Mr. Lenberg also visited the Coffee County office on other occasions at the end of January.

Mr. Lenberg and Mr. Logan could not be reached for comment. A lawyer for Ms. Latham told CNN that Ms. Latham “would not and has not knowingly been involved in any impropriety in any election.”

SullivanStrickler has previously stated that it is a “politically agnostic” firm that had not “illegally ‘breached’ servers” or other voting equipment, but rather had been hired to “preserve and forensically copy the Dominion voting machines used in the 2020 election.”

Ms. Powell, in an email, wrote that the Coffee County affair “is being grossly misreported” and added, “If you are interested in accuracy, I would encourage you to leave me out of your story.”