Virginia McLaurin, Sharecroppers’ Daughter Who Danced With the Obamas, Dies 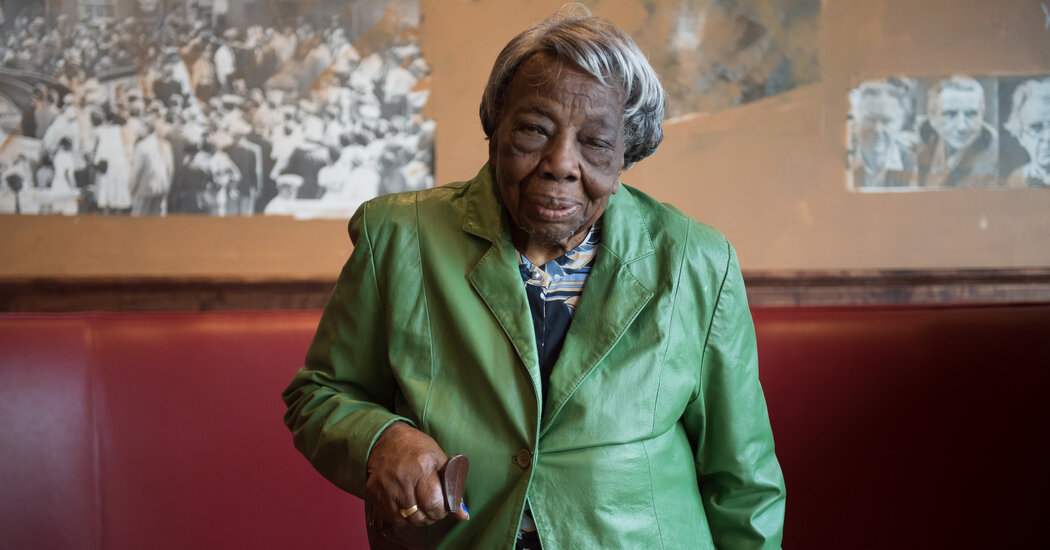 Virginia McLaurin, who was born into a family of Black sharecroppers in the Jim Crow South and took a star turn as a centenarian when she danced with the Obamas at the White House, died on Monday.

Ms. McLaurin had been receiving hospice care and died peacefully in Maryland, where her son lives, according to a statement from her family and Deborah Menkart, a friend who helped arrange her White House meeting with the Obamas. She was 113 by her own accounting but did not have a birth certificate.

She is survived by her son Felipe Cardoso, her daughter Idamae Streeter and at least 50 other descendants, including a great-great-great-grandchild, her family said. Another son, Willie Johnson Jr., died decades ago, Mr. Cardoso said.

Mr. Cardoso, 49, of Olney, Md., said Ms. McLaurin took him in when he was 3 years old and later adopted him.

Ms. McLaurin lived quietly in Washington, D.C., for decades before her life took an unexpected turn in February 2016, when she joined a star-studded list of guests attending a Black History Month reception at the White House.

Upon entering a room where the Obamas were waiting to greet her, she raised her hands and yelled “Hi!” As President Obama held her arms, she began dancing in place, supported by her cane.

As Mr. Obama led her across the room to his wife, Michelle Obama, he implored the centenarian to take it easy. “Slow down now,” he said affectionately. “Don’t go too quick!”

In the center of the room, Ms. McLaurin danced with Mrs. Obama for a moment. Then, with a president on one arm and a first lady on the other, she paused to consider the setting — and her place in American history.

“I thought I would never live to get in the White House,” she said, slowly and carefully, as the Obamas chirped encouragement. She added that she was “so happy” to have a Black couple living there.

“You have just made our day,” Mrs. Obama said. “You know that? That energy, man.”

“Well, you made my day,” Ms. McLaurin replied.

“People focus on her dancing” with the Obamas, Ms. Menkart said on Tuesday. “But she also spoke — and drove the conversation in a way that many people would not have known how to do.”

Virginia Lugenia McLaurin’s exact birth date is unclear. She said she believed it had been recorded in a family Bible as March 12, 1909, The Washington Post reported. According to a 2016 letter from a vital records department in South Carolina, which Ms. Menkart provided to The New York Times, she was said to have been born on March 12, 1916. But the letter also noted that no birth records for her had been found between the years 1915 and 1920.

What is clear is that Ms. McLaurin’s hometown was Cheraw, S.C. It was incorporated in 1820 and is about 100 miles inland by car from the Atlantic coast.

Her father, John Oliver Campbell, died when she was 1, according to Ms. Menkart. Her mother, Flora Ella McQueen, taught her to sew.

“We had working clothes and Sunday clothes,” Ms. McLaurin later told an interviewer for an oral history project. “Now, you wear anything you want.”

She said her grandfather was a Methodist minister and that her stepfather was a Baptist, and that she was baptized in a white man’s fishing pond when she was about 11.

She would walk 10 miles to school, on one pair of shoes a year, she said. And she dropped out when she was in the eighth grade to get married.

Her first husband died in a bar fight over money, and she would marry twice more, Ms. Menkart said.

Ms. McLaurin moved to Washington around 1939 as part of the Great Migration of millions of Black people from the American South to Northern, Midwestern and Western states that had begun in the 1910s. She worked in a laundry and at a shipyard, among other places.

In her retirement, she devoted much of her time to volunteering in local schools, her family said.

When the Obama administration released the video of her visiting the White House, it was widely shared on social media and gave her something new and unfamiliar: a public profile.

Donations from strangers helped her move to a better apartment and get medical treatment, Ms. Menkart said. She was also invited to attend a baseball game, a play and other public events as an honored guest. In 2017, she celebrated her birthday with the Harlem Globetrotters and a classroom of public schoolchildren who called her “Grandma Virginia.”

Ms. McLaurin was eager to put the clout that she earned to good use.

One of her passions was voting. In videos that she recorded ahead of the 2016 election, she encouraged young people to vote for a simple reason: It was the only way to be counted.

Ms. McLaurin also used her public perch to draw attention to her inability to obtain the government identification she would need to board an airplane. Getting a nondriver photo ID would have required a birth certificate from South Carolina, but to get the certificate she would have needed the ID.

“I don’t think I’ll ever get that face card,” Ms. McLaurin told the Washington Post columnist Courtland Milloy two months after her visit to the White House. “I was birthed by a midwife and the birthday put in a Bible somewhere. I don’t know if they even had birth certificates back then.”

Days after Mr. Milloy publicized that Catch-22, Mayor Muriel E. Bowser of Washington announced a new regulation that modified the requirements for getting the ID for people 70 and older. She also visited Ms. McLaurin’s home, and stood by as she signed paperwork.