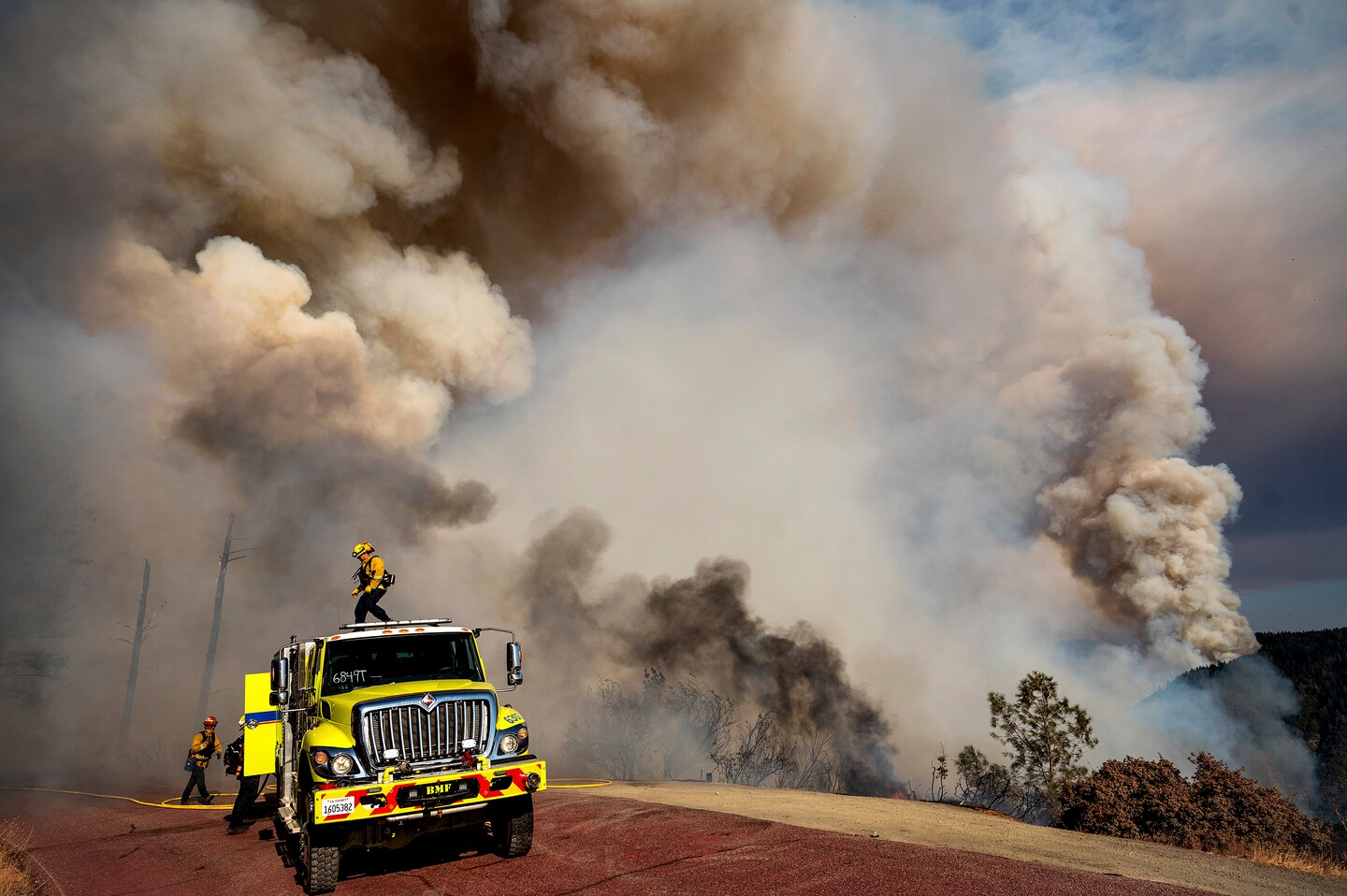 As the Mosquito Fire exploded in Northern California on Thursday — one of numerous blazes erupting amid a historic September heat wave — experts compared the extreme fire behavior and spread to a volcanic eruption or nuclear blast. The fire has sent massive columns of smoke high into the atmosphere.

The extreme heat has exacerbated conditions driving the flames. The fire is chewing through dense and drought-stressed forest and chaparral in the steep terrain in the Tahoe National Forest, and it is threatening the nearby towns of Foresthill, Georgetown and Volcanoville. Cal Fire reported that the fire ballooned to about 23,000 acres and made a run yesterday, pushing into Volcanoville and destroying structures but not the entire community.

“It’s the most intense fire of the season in Northern California,” Craig Clements, a professor of meteorology and climate science at San José State University, said in an interview. “These really extreme temperatures caused extensive drying of the dead fuels.”

Because of “continued dangerous fire weather,” California Gov. Gavin Newsom (D) on Thursday declared a state of emergency for counties affected by the Mosquito Fire, and also declared an emergency for the Fairview Fire, which is burning in Southern California.

Of the Mosquito Fire, Clements added that there’s “high risk for a lot of the region as this fire progresses, mainly because of the dry fuel conditions.”

He said the blaze reminded him of the Creek Fire, which tore through the Southern Sierra Nevada in September 2020 and spawned two fire tornadoes.

Clements’s students were on-site studying the Mosquito Fire as part of the California Fire Dynamics Experiment being run under the auspices of the National Oceanographic and Atmospheric Administration, and they had a front-row seat when the fire exploded in size Thursday afternoon.

In this case, the smoky plume reached so high — about 40,000 feet — that it formed a pyrocumulonimbus cloud, or pyroCb — a sure sign of extreme fire behavior.

Forrest, whose research focuses on the factors that lead to fire-generated tornadoes, said the Mosquito Fire had a rotating column that was confirmed visually and by radar.

“The fact that it was still putting up a pyroCb after sunset was an indicator of how much heat this fire was putting out,” she said. “I was blown away.”

The cause of the blaze, which began Tuesday, is under investigation.

This week’s record-shattering heat probably was a catalyst for the extreme burning conditions observed yesterday. The major utility Pacific Gas and Electric also reported that electrical activity on its equipment “occurred close in time to the report time of the fire.”

The area has been under a “high risk” designation for wildfire all week for hot, dry and unstable weather and very flammable vegetation.

“This leads to extra-long burn periods and significant slope and fuel driven fires,” said Brent Wachter, a fire meteorologist with the Northern California Geographic Area Coordination Center, in an email.

Data shows that fire danger in the Northern Sierra has skyrocketed in the past few weeks, with vegetation nearing record lows for moisture content. Some areas, such as the Sacramento Valley and its foothills, already have hit that mark, according to Wachter.

An excessive-heat warning continues Friday for the region, where the National Weather Service in Sacramento expects temperatures of between 100 and 114 degrees in the valleys and foothills and up to 105 degrees in the mountains. An all-time high temperature record of 116 was set in downtown Sacramento on Tuesday.

Because of the volatile conditions, meteorologists are also closely watching the remnants of Kay, which was downgraded from a hurricane to a tropical storm, given concern that the tropical moisture surge could unleash dry lightning and ignite new fires. Forecasts indicate that dry lightning is possible in the Northern Sierra this weekend.

There also was concern that strong winds from Kay could push the Fairview Fire farther into populated areas before significant rain arrives in Southern California on Friday. The 27,319-acre blaze has claimed two lives and destroyed a dozen structures.

According to the National Interagency Fire Center, 71 large fires are burning, mostly in the western United States, including 28 in Idaho, 12 in Montana, 11 in Oregon and eight in California. Red flag warnings for strong easterly winds have been issued for western Washington state and Oregon on Friday and Saturday, increasing the risk of additional fast-spreading blazes.

Smoke from multiple western wildfires was compromising air quality in California and the Intermountain West and is expected to linger into at least the weekend. Unhealthful to hazardous conditions are prevalent in the Sierra Nevada, central Idaho and eastern Washington and could worsen for major cities along the West Coast. The National Weather Service in Medford, Ore., said that smoke from wildfires is drifting westward on the easterly wind flow and warned that “the risk of rapid fire spread is significant today into Saturday.”

Research has shown that climate change has contributed to an increase in the frequency of large fires and the size of the area burned by western wildfires, as fire seasons become longer and more dangerous. In California, autumn also is trending warmer and drier, with an increasing risk of extreme fire weather. High tree mortality due to drought and high temperatures as well as overly dense forests from a long history of fire suppression also are important factors.

“Fires are burning hotter and more intensely than we’ve ever seen,” Forrest said.