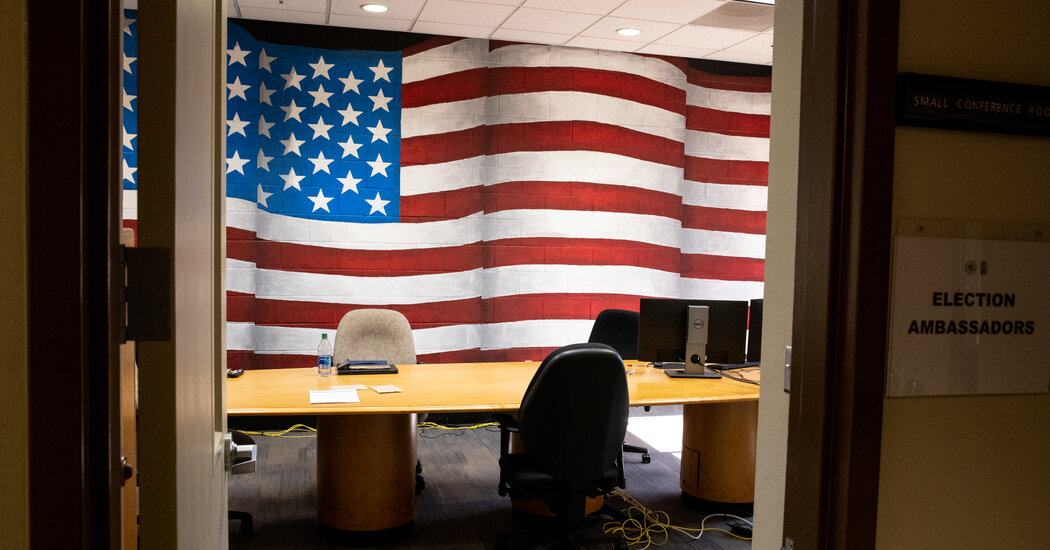 Kari Lake, the Republican candidate for Arizona governor who has sown doubts about election integrity, sought to strike a balance on Tuesday between raising suspicion about Maricopa voting officials — and her Democratic opponent, Secretary of State Katie Hobbs — and discouraging turnout by her supporters at the polls.

“My message to the people in Arizona is do not get out of line until you’ve cast your vote,” Ms. Lake told reporters outside a polling station on the downtown campus of Arizona State University. “Stay in line and vote, vote, vote — we’ve got to vote today.”

But Ms. Lake suggested, without providing evidence, that perhaps the problems were being caused, deliberately, by Maricopa County officials.

“They may be trying to slow a red tsunami, but it’s coming,” she said. With her election lawyer beside her, Ms. Lake said she had been planning to vote in a conservative precinct but instead came to a voting center in a left-leaning part of Phoenix.

“We switched from a Republican area to vote and came to the heart of liberal Phoenix to vote because we wanted to make sure that we had good machines and guess what? They’ve had zero problems with their machines today.”

She added, “This is incompetency — I hope it’s not malice — but we’re going to fix this.”

One of the leading voices against the machines, the MyPillow founder Michael J. Lindell, said on Tuesday that the situation with tabulators in Maricopa County “is going to be the big crime story of the year when all this comes out. ” In an appearance on “War Room,” the podcast of Stephen K. Bannon, the former Trump adviser, he added, “We have to get rid of these machines immediately.”

So far this year, legislation has been introduced in six states that would restrict or completely outlaw the use of tabulators — including six separate bills in Arizona, all of which have failed to pass.