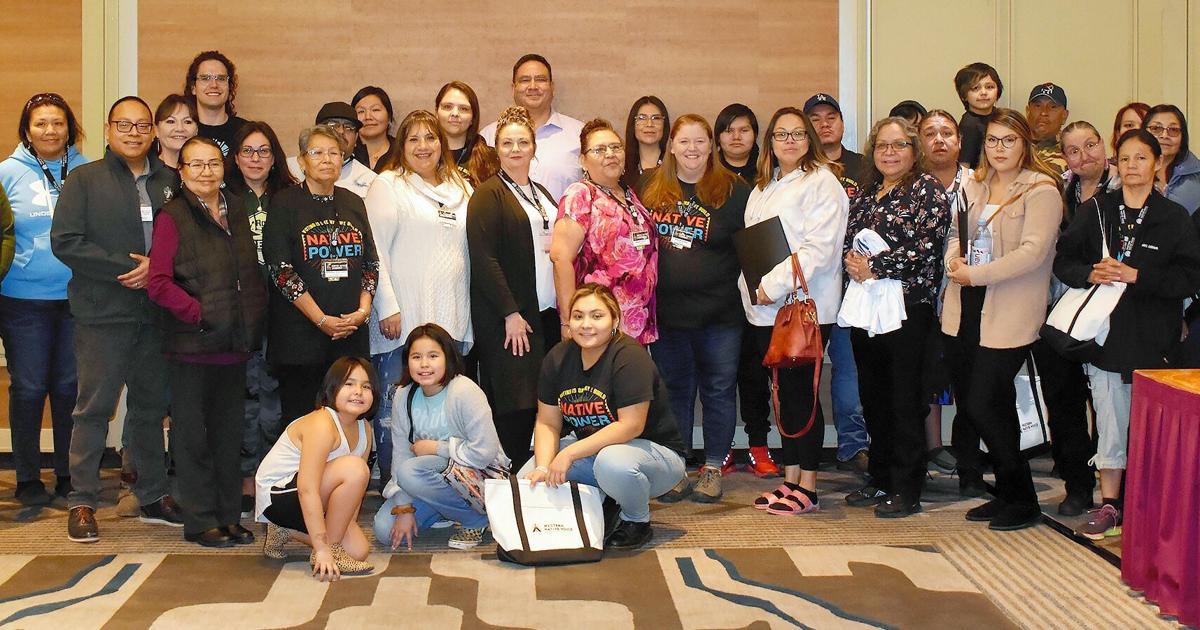 The event was open to all WNV members, with priority given to those who had signed up for the organization’s original conference, that was scheduled to take place last fall, but it was postponed so that the organization could prioritize disseminating midterm election information.

WNV is a Billings-based nonprofit corporation and social welfare nonprofit. It aims to inspire Native leadership through community organizing, education, leadership, and advocacy.

The conference kicked off the following morning, starting with a presentation from WNV Deputy Director Ta’jin Perez.

Perez is Totonac Indigenous and grew up in Wyoming. Perez had always shared a connection with local Indigenous communities, but the 2016 Dakota Access Pipeline protests that took place on the Standing Rock Reservation in South Dakota fueled that inspiration to advocate for Indigenous causes. “I felt compelled to take action on my values of solidarity with other Indigenous people,” said Perez.

Perez organized benefit concerts and other fundraiser events to support the Standing Rock community, which kick started his work with community organizing and would lead to a career organizing throughout Montana. “I’ve really come to fall in love with the uniqueness of all of the communities here,” said Perez.

The attendees then split off into groups, those interested in community organizing, the Grassroots Track, and those more focused on electoral politics, the Political Track.

The Grassroots Track consisted of the Leading from the Self session, which showed attendees how to use their personal stories to organize their communities, and the Power Mapping session, which helped attendees understand how grassroots organizing can help win on important issues.

These sessions were hosted by Natanya O’Neill, WNV field director. O’Neill is Northern Cheyenne and has done extensive civic engagement work on the Flathead Reservation.

The Political Track consisted of the Working Elections and Campaigns session, for those interested in a career in politics, and the Running for Office 101 session, which aimed to show attendees that running for office may be more accessible than they may have thought, as well as explain the ins and outs of organizing a successful political campaign.

The Political Track tied into Perez’s overarching goal for the event, which was to inspire civic engagement amongst Native Americans and to show them the positive impact they can have in their community by shaping public policy.

In Running for Office 101 Lance Fourstar explained to attendees the power of having Native Americans in office. To illustrate the importance of this, he described how the Montana Indian Caucus pushed against a draft resolution that aimed to dismantle reservations in Montana.

Although the resolution has been withdrawn, it was an issue that came up several times throughout the event, as it was a concern among attendees and revealed to many the importance of having Native American representation in the legislature.

“Please put forward the effort,” said Whitford, urging Native attendees to run for politics. Fourstar agreed, adding, “It took 200 years to get to this point, it’s not going to be over soon.”

“I decided a woman’s place is in the house and the senate,” said Stewart-Peregoy, on why her identity both as a Native American and as a woman inspired her to run for office, a move Perez would describe as acting in one’s political self-interest.

Perez urged attendees to identify what the self-interests of themselves and their communities are and detailed why and how attendees should champion the advancement of these self-interests.

A reoccurring theme in the presentations made by elected officials was the importance of remaining close and connected with one’s culture to better serve their communities and reduce stress.

Whitford said that she does this by beading. Fourstar said that he does this through sweats. “It is so important to have that connection in your community,” said Whitford.

At the end of the night, attendees played a stick game tournament. Some attendees had played before, but for many it was their first time and an opportunity to learn a new cultural activity.

The event wrapped up the following morning, with a presentation from Dr. Wilson, an enrolled Fort Peck member, titled Indigenous Rights and the Montana Constitution. Wilson spoke to attendees about how they could harness the law to protect their rights.

For example, Wilson suggested that those facing discrimination contact the Human Rights Commission to file a complaint. If the issue is not resolved, litigation becomes possible. Litigation has helped to resolve discrimination across the state of Montana, including cases fought for by WNV.

A lawsuit brought on behalf of WNV, (as well as other Native American organizations, the Confederated Salish and Kootenai Tribes of the Flathead Reservation, the Blackfeet Nation Fort Belknap Indian Community, and Northern Cheyenne Tribe) aimed to challenge voting restrictions that WNV and other Native American advocacy groups deemed discriminatory.

Wilson stressed the importance of participation from Native Americans in the political process. He emphasized the role of electoral politics, especially as a means to fight against discrimination. “We have to find a candidate who will be 100% in our corner,” said Wilson.

He also described the relevance of tribal sovereignty, detailing the ways in which jurisdictional issues can fuel the MMIW crisis. “Women go missing and murdered because everyone knows that the jurisdiction on Indian reservations is a mess when it comes to Indian and non-Indian relationships,” said Wilson.

Both Wilson and Perez advocated for retaining Native-majority districts in Montana to ensure that Natives have a say in the legislature. Citizens have the ability to support their preferred districts by making a public comment to the Districting and Apportionment Commission, who draw the political boundaries that determine who will represent which constituents throughout Montana.

Wilson was followed by Perez, who closed by thanking attendees and reminding them of all the avenues that they can take to make a positive change in their communities.

The adult programs coincided with the Expanding Horizons Ambassador Program that was held concurrently, in a separate room. Like the Inspire Native Leadership Membership Conference, it was the first event of its kind from WNV. High school-aged applicants from across the state were chosen to participate in the event, where they hoped to gain leadership skills that would help them better serve their communities.

The Expanding Horizons ambassadors listened to several presenters, including Monde Solomon of Embicini Wellness, who spoke about health and wellness. Wilson and fellow enrolled Fort Peck member Myltin Bighorn spoke to the students about the importance of creating a vision, setting goals, education and believing in yourself. The ambassadors also participated in a quill work class presented by Kinsley Walks Along.

WNV serves all eight of Montana’s tribal nations, and the event was attended by members from across the state of Montana, and even other states, such as Wyoming.

The event was also attended by the WNV Membership Committee: Laurie Kindness, Lance Fourstar, Jodi Hunter, and Dolly Wells. Wells and Hunter were among several attendees who were representing the Flathead Reservation.

Of the conference, Ta’jin Perez said, “I think this was really a great success. We accomplished what we set out to accomplish here, which was talk about community organizing and really inspire empowerment and inspire action.”

Perez said that WNV members are critically important to their communities, so he was happy to receive positive feedback about the experience from attendees who said that they learned a lot from the event and that it helped them to feel like a part of their community.

“That is really the most important thing for us at Western Native Voice is making sure that these opportunities are provided for individuals who are really hungry for it and really looking for this kind of information,” said Perez.

This event was their first conference, and organizers hope that it will be the first of many.

If you would like more information on redistricting or on providing testimony regarding redistricting, contact Perez at tperez@westernnativevoice.org.

WNV will continue to host events, including conferences, on a regular basis. Some of which will be open to the public, and others that will be exclusive to WNV members. To become a member, learn more about ways to make an impact in your community, or find events hosted by WNV, find WNV on Facebook, Twitter, or Instagram, or visit them at Westernnativevoice.org. WNV accepts donations, but there is no cost to become a member.