What an all-Republican delegation plans 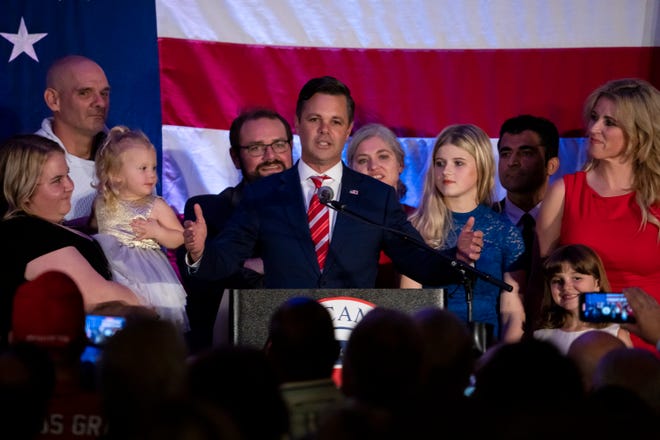 When U.S. Rep-elect Zach Nunn swears into office on Tuesday, it mark the first time since the 1950s that Iowa’s D.C. delegation will be comprised of entirely Republicans.

Nunn anticipates Iowa’s four Republican votes will give the state more power in the House, where Republicans will hold a majority in 2023.

“This is the loudest voice that Iowa is going to have in Washington, basically since the Eisenhower administration,” Nunn told the Des Moines Register.

Iowans also reelected U.S. Sen. Chuck Grassley to his eighth Senate term. He will join Republican U.S. Sen. Joni Ernst, who has another four years remaining in her term.

However, Iowa’s “red wave” was an outlier in the country where Democrats hung onto seats and cling to their control of the U.S. Senate. After two years of a Democratic trifecta, Congress will be divided in 2023, making it harder for either party to push through their priorities.

More:The Republican red wave foundered nationally, but in Iowa it swept away Democrats

Incumbent U.S. Reps. Randy Feenstra, Ashley Hinson and Mariannette Miller-Meeks each said in pre-election surveys: promoting and legalizing the year-round use of biofuels would be a top domestic priority for 2023.

Under current law, higher ethanol blends may not be sold in the summer months due to concerns about increased air pollution. President Joe Biden temporarily waived that standard in 2022 to help combat high fuel prices, but Iowa leaders called for a more permanent change.

“I am committed to proving that clean, renewable energy is attainable for every state by using Iowa as a framework to show how it can be done,” Miller-Meeks had said.

Hinson argued that focusing on biofuels will help address inflation, which appeared to be soaring before the election.

“I am championing an all-of-the-above energy strategy that prioritizes Iowa biofuels to bring down the cost of gas and restore our energy independence while boosting Iowa’s agriculture economy,” Hinson had said.

Nunn said his top domestic priority would be addressing inflation and “reducing government interference with our lives.” As he did on the campaign trail, Nunn called for the federal government to mirror Iowa, where the Republican-led Legislature championed tax cuts and a budget surplus.

Meanwhile, Grassley said Friday he was calling on the Biden administration to make a New Year’s resolution for “border security.”

“The Biden administration’s border policies are allowing Mexican drug cartels to rule the roost along our southern border. And that has created grievous harm to the social fabric of America,” Grassley’s statement said. “Let’s ring in the New Year with a commitment to stop the humanitarian and drug trafficking crises at our border once and for all.”

Ernst also said “our national security and defense remain top of mind” as she goes into the 2023 session.

“While we secured a number of strong priorities in this year’s defense package, I’ll continue to push legislation that ensures our military remains the most lethal fighting force on the face of the planet,” Ernst said in a statement Thursday.

But with Democrats controlling the Senate and Biden still in office, Iowa’s all-red delegation will need to work across the aisle to get anything signed into law.

“I’m not naive,” Nunn said. “I think it’s gonna be challenging… but there’s still a lot of opportunity for good bipartisan work to happen.”

Nunn and Grassley had said they were interested in working with Democrats to lower the cost of prescription drugs. Grassley has pointed toward a 2019 bill he sponsored with U.S. Sen. Ron Wyden, a Democrat, to cap out-of-pocket prices for medication. That bill passed a Senate Finance Committee vote that year, when Republicans controlled the Senate. It has not advanced since.

“Our bipartisan bill would lower costs without harming life-saving cures and treatments the American people expect,” Grassley has said.

Miller-Meeks, an ophthalmologist, was also hopeful that lawmakers could find common ground on medical issues, She highlighted a bipartisan proposal to improve protocols for step therapy, a practice that requires patients to try cheaper medications before being prescribed more costly prescriptions.

Ernst said she intends to use her role on the Democrat-led Senate Small Business Committee to address childcare shortages. She also emphasized the importance of the annual farm bill, promising to “prioritize the needs of Iowa’s farmers and growers on the Senate Agriculture Committee.”

Katie Akin is a politics reporter for the Register. Reach her at kakin@registermedia.com or at 410-340-3440. Follow her on Twitter at @katie_akin.