What Are The Best Stocks To Invest In? 4 Entertainment Stocks To Know 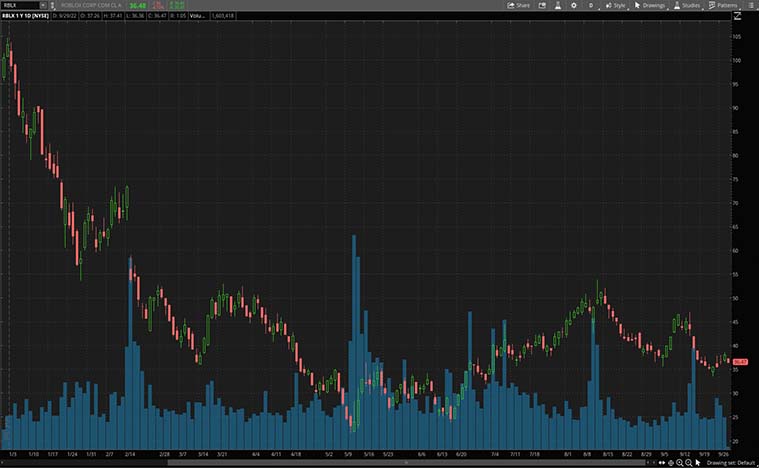 Entertainment stocks are a sector of the stock market that includes companies involved in the production and distribution of entertainment products and services. The sector includes a wide range of businesses, from movie studios and streaming services to video game developers and more. In addition, entertainment stocks tend to be very volatile, as they are highly dependent on consumer spending patterns.

This means, when the economy is doing well, people are more likely to spend money on leisure activities, which in turn can drive up the stock prices of entertainment companies. However, during economic downturns, people often cut back on their spending on entertainment, leading to lower stock prices. For investors, this volatility can provide an opportunity to buy stocks at a discount during periods of economic distress and sell them at a profit when the economy recovers.

Starting off this list today is US-based technology entertainment company Roblox Corporation (RBLX). Specifically, Roblox operates an online video game platform that allows gamers to create, develop, and monetize games or experiences for other players. Simply put, the company offers its developers a hybrid of a game engine, publishing platform, online hosting and services, marketplace with payment processing, and social network. For a sense of scale, last month Roblox reported its second-quarter 2022 average daily active users came in at 52.2 million.

In September, Roblox announced August 2022’s key metrics. Diving in, the company reported its estimated revenue was in the range of $208 million to $211 million. This represents approximately 22% – 24% during the same period, a year prior. Additionally, Roblox said its daily active users (DAUs) for August were 59.9 million, which is 24% on a year-over-year basis.

Aside from that, last month Roblox Corporation reported its 2nd quarter 2022 financial results. In the report, Roblox reported a Q2 2022 loss of $0.30 per share, along with revenue of $591.2 million. This is versus the Street’s consensus estimates of a loss of $0.23 per share with revenue of $658.5 million. Meanwhile, Roblox announced a 30.2% revenue increase on a year-over-year basis. What’s more, the company announced its Average Daily Active Users (DAUs) increased 21% year-over-year to 52.2 million.

So far this year, Shares of Roblox stock have dropped over 63%. On Thursday morning, RBLX stock is down another 5% at $36.11 per share. Considering this, do you think now is a good time to invest in Roblox stock for a buy-and-hold opportunity?

After that, let’s take a look at streaming giant Netflix Inc (NFLX). For starters, Netflix’s primary business is a streaming video-on-demand service. In addition, the company’s platform is available in almost every country worldwide. Netflix primarily generates revenue from subscriptions to its eponymous service.

Specifically, the company offers its subscribers a broad variety of award-winning TV shows, movies, anime, documentaries, and much more. Meanwhile, the company’s business model allows users to watch as much as they want, whenever they want commercial-free for one monthly subscription fee. For a sense of scale, today Netflix has over 200 million paid subscriptions spread out across 190 countries worldwide.

Moving on, this month, Netflix announced they will report their third-quarter 2022 financial results on Tuesday, October 18, 2022, after the market closes. In the meantime, let’s take a look at how Netflix performed in the second quarter of 2022.

In the last month of trading, Netflix stock has recovered over 7% as of Wednesday morning’s trading session at $240.72 per share. Meanwhile, shares of NFLX stock are still off 65.65% from its 52-week high of $700.99 a share. Keeping this in mind, could now be the right time to add NFLX stock to your long-term portfolio at its current price levels?

Following that, we have one of the largest entertainment and media companies globally Walt Disney Company (DIS). Getting straight to it, Walt Disney Company’s primary business is the production of motion pictures and television programs. In addition to that, Walt Disney also owns and operates theme parks and resorts worldwide. Notably, these include names like Disneyland, Walt Disney World, and Tokyo Disney Resort. Moreover, Walt Disney’s consumer products division markets a broad range of products based on its film and television properties, including toys, clothes, and its video streaming platform Disney+.

Furthermore, Bob Chapek, Chief Executive Officer, The Walt Disney Company commented this about Q3’s results, “We had an excellent quarter, with our world-class creative and business teams powering outstanding performance at our domestic theme parks, big increases in live-sports viewership, and significant subscriber growth at our streaming services. With 14.4 million Disney+ subscribers added in the fiscal third quarter, we now have 221 million total subscriptions across our streaming offerings.“

In 2022 so far, DIS stock is still down over 37% as of Thursday’s mid-morning trading session at $97.27 per share. All in all, should investors be paying close attention to Walt Disney stock in thestock market today

Last but not least, Spotify Technology (SPOT) is a music streaming service that offers users the ability to listen to their favorite tunes anytime, anywhere The company’s platform enables users to discover the latest singles and albums, playlists, and a variety of songs in different genres. For a sense of scale, as of the second quarter of 2022 Spotify has 433 million users, including 188 million premium subscribers, across 183 markets worldwide.

At the end of July, Spotify released its second quarter 2022 financial results. Specifically, Spotify reported a second-quarter 2022 loss of $0.91 per share, with revenue of $3.1 billion. The consensus estimates for Q2 2022 were a loss of $0.68 per share, along with revenue of $3.0 billion. Next, the company notched in an 8.7% increase in revenue during the same period, in 2021. In addition to that, Spotify commented in its earnings presentation to shareholders it projects third-quarter revenue of approximately $3.04 billion.

The company said this in its release to shareholders, “Nearly all of our key metrics surpassed guidance in Q2’22, led by MAU and Subscriber outperformance, healthy Revenue growth and a modestly better Operating Loss. Most notably, MAU performance accelerated this quarter, with net additions reaching a record Q2 high of 19 million.“

Shares of Spotify stock have been beaten down over 63% as of Wednesday’s morning trading session at $88.03 per share. As it stands, SPOT stock is currently trading 71.18% off its 52-week high of $305.60 a share. With this in mind, do you think SPOT stock can be considered undervalued right now?

If you enjoyed this article and you’re interested in learning how to trade so you can have the best chance to profit consistently then you need to checkout this YouTube channel.
CLICK HERE RIGHT NOW!!