What is even left of the Voting Rights Act? 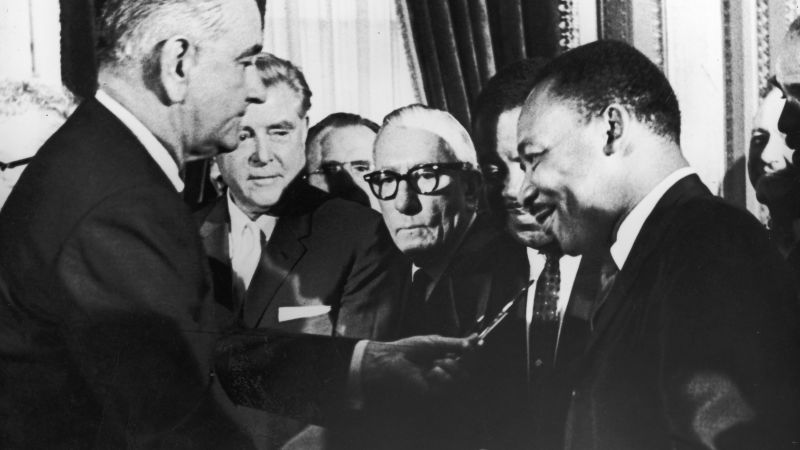 A version of this story appeared in CNN’s What Matters newsletter. To get it in your inbox, sign up for free here.

But the landmark 1965 law looms large in American elections even though conservative justices on the Supreme Court seem to be over it.

Recent efforts to update it have failed.

The question now is what’s left?

The law is broken into five sections and did several important things when it was first passed.

Section 1, which is still operable, outlaws barriers to voting like literacy tests, requires the same standards be applied to all voters and bans voter intimidation by state officials.

The first gutting of the Voting Rights Act came in 2013, when the court invalidated the system of preclearance, which forced states and jurisdictions with a history of racial discrimination and extremely low voter turnout to clear new voting restrictions with either the federal government or a federal court in Washington, DC.

But in the case Shelby County v. Holder, Chief Justice John Roberts noted that the formula for determining which states and locations must preclear voting law changes was based on data from 1964, 1968 and 1972.

“Our country has changed,” he wrote, arguing that Congress should come up with a new formula. It never did and efforts to update the law with a new Voting Rights Act named for the late Rep. John Lewis are unable to break a GOP filibuster.

The second gutting of the Voting Rights Act came in 2021. In the case Brnovich v. Democratic National Committee, the Supreme Court upheld provisions of an Arizona law that would throw out ballots cast at the wrong precinct and limited who could collect absentee ballots. The decision opened the floodgates to new restrictions in GOP-controlled states and called into question protections in Section 2 of the Voting Rights Act against vote denial, or making it hard for people to vote.

Now the court is looking at upending the Section 2 protection against vote dilution, or making votes meaningless, with a case out of Alabama concerning the state’s congressional map. More than a quarter of Alabamians are Black, but the map created only a single majority-Black congressional district out of the state’s seven districts. A federal court ruled the map harmed minority voters, but in a 5-4 ruling, the Supreme Court allowed the map to remain in place while it considers the case. Alabama’s Republican secretary of state has argued that considering race to draw maps that give power to Black voters is itself discriminatory. A result favorable to Alabama could let the state draw congressional lines in such a way that no minority voters would ever have a reasonable chance of achieving proportionate influence.

Note re: another great CNN newsletter: Fredreka Schouten writes in the Citizen newsletter this week that the Alabama case is one of two the court is hearing that could change future elections. Read more.

Schouten also has a strong report on the scramble to make sure Floridians affected by Hurricane Ian can vote. Read it.

After it was passed in 1965, the Voting Rights Act had an immediate effect and updates to the law were passed periodically, under both Democratic and Republican presidents, until 2006. They added protections for non-English speakers, among other things.

The Voting Rights Act was passed at a time when fewer than half of eligible Black voters were registered to vote in some Southern states.

In elections since then, and since the Supreme Court’s 2013 preclearance decision, a gap has reemerged between White voter turnout and Black voter turnout, according to a Brennan Center for Justice analysis of Census data. It happened in conjunction with a raft of strict voter ID laws passed over last decade that were made possible in part by a 2008 Supreme Court decision. There is research that suggests these laws can reduce turnout in more racially diverse areas and that they also do not affect enough people to alter the outcome of elections.

I talked to Zoltan Hajnal, a University of California at San Diego professor who has studied the effect of voter ID laws. He argued voter turnout alone does not tell the story of access to voting.

The US Commission on Civil Rights, a bipartisan organization, issued a unanimous report in 2018 that found voter restrictions were affecting minority voters.

“We got here from 1965 because of those tools because of the protection, it’s a fool’s errand to think that we don’t still need them and the last 10 years or so … are a clear indication that that’s the case,” Danielle Lang, who leads the voting rights team at the Campaign Legal Center, told me. She said that things like long lines at polling places, absentee ballots that are thrown out on technicalities and other obstacles seem to disproportionally affect minority communities.

In the future, Lang predicted these will seem obviously discriminatory.

“With the benefit of hindsight, things like poll taxes and grandfather clauses all look so obvious,” she said. “Some of the forms of voter suppression that we see today don’t seem so obvious to us today. I think they might look really obvious to us in hindsight.”

There’s also a strong argument that when people are given more ample opportunity to vote, they do. The 2020 presidential election, during which states extended and expanded voting options due to the Covid-19 pandemic, saw the highest turnout of the 21st century.

Multiple states moved since 2020 to limit early voting and voting by mail. Those efforts were led by Republicans, who theoretically stand to gain if fewer people, and fewer minorities, vote.

The restrictive laws will affect voters of color more than the general population, according to the Brennan Center. Some of the restrictions seem pretty clearly aimed at Black voters, such as restrictions on Sunday voting.

Barriers to voting like the literacy tests that existed before the Voting Rights Act will not reemerge, Yurij Rudensky from the Brennan Center’s Democracy Program told me. But he said efforts to limit the influence of communities of color will continue in redistricting and through the creation of barriers like making it more difficult to register to vote or underfunding certain polling places.

“It really is a whole ecosystem of laws, regulations and decisions that contribute to how fair and free an election is,” Rudensky said.

The current state of the ecosystem is that the federal laws meant to protect minority votes are being challenged and state laws that have the effect of putting up barriers are being passed.