What’s going on with the US economy 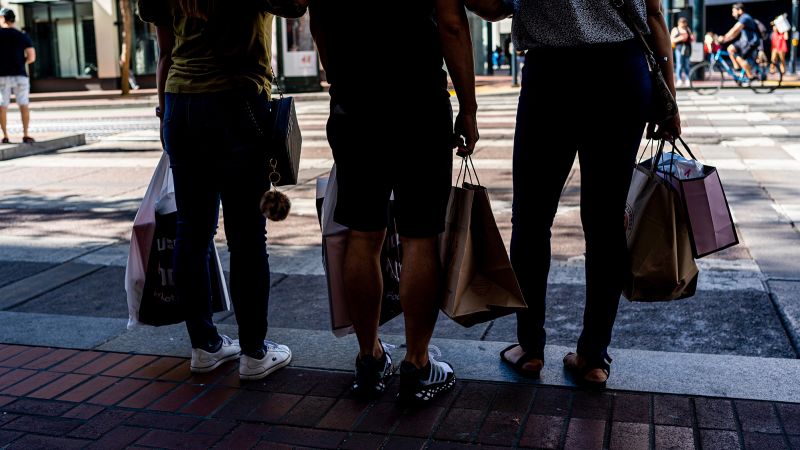 A version of this story appears in CNN’s What Matters newsletter. To get it in your inbox, sign up for free here.

Forget, for this one year, that tired cliche about the key to US politics: “It’s the economy, stupid!”

This year, it’s time to wrap your head around what’s going on with this stupid economy.

There is no recession. At least not yet. Data on the country’s gross domestic product released Thursday showed growth in the economy. Here’s the GDP data.

People have jobs. Unemployment is at a 50-year low.

Exports are up. There are indications of an American manufacturing resurgence after globalization faltered during Covid-19.

But for all those bright spots, the kitchen-table view of the economy doesn’t feel very strong at all.

People can’t afford as much. Wages aren’t keeping up with inflation, which remains at a 40-year high.

Mortgage rates just reached a 20-year high. The average is over 7% for the first time since 2002. Read more from CNN’s Anna Bahney.

It’s expensive enough that people are eating a lot more at McDonald’s, even though the price of their burgers is up too.

CNN’s Christine Romans has an excellent rundown of all the prognosticating about the economy and notes there is a “surplus of uncertainty ahead.” While few predict a downturn like the Great Recession, many or most economists are still predicting a recession of some kind.

“A recession is scary. People lose jobs and businesses close. But inflation is also scary. And it will take a slowing economy – maybe even a recession – to control soaring prices,” she writes.

The rising rates are a key pillar of the Federal Reserve’s efforts to cool inflation. From its perspective, the cooling housing market is good news.

More good news on the inflation front will come when the unemployment rate goes up.

Try figuring out the winning political message about people losing jobs being a good thing. It probably doesn’t exist, which is why Republicans have found so much success blaming Democrats for inflation this year – but the messaging from the White House and Democrats just sounds confusing.

During an appearance on MSNBC, White House chief of staff Ron Klain laid out a three-pronged argument President Joe Biden will make:

The shorter version might be: good, but not good enough.

The alternative, pushed by Republicans, is much easier for voters to digest: You’re feeling pinched, and Republicans are not in charge.

Or, as House Minority Leader Kevin McCarthy pointed out on Twitter, the price of Halloween candy is way up. Republicans blame government spending and Democrats for causing the inflation, which is partially true, but also dismisses the fact that supply chain kinks and the war in Russia have also contributed.

Democrats have also targeted corporations, particularly oil companies, for using the excuse of inflation to pad their profits. And Sen. Bernie Sanders recently called out the Mars company over those very same candy prices.

Corporations will keep raising prices until people stop spending, which is why the Fed is intent on cooling the economy.

While the GDP report will quiet the argument that the US is technically in a recession, it’s probably not going to do much to change the Fed’s inflation game plan, CNN’s Matt Egan said on “Newsroom” on Thursday.

CNN’s global economic analyst Rana Foroohar noted Thursday that the good news in the report is that the Fed’s rate hikes “are doing what they’re supposed to do, which is to tamp down the economy and dampen consumer spending.”

However, Foroohar noted that for Americans, not feeling comfortable to spend “doesn’t feel great.”

But it’s necessary, she argued, to avoid a “hard landing,” where inflation is put under control only with a painful recession.

She did agree with the White House claim that the US, so far, is weathering inflation better than the rest of the world.

Europe is fearing a difficult winter. China is reeling from a debt crisis and stock market crash.

“As tough as it seems here, the US is, as usual, the cleanest dirty shirt in the closet,” Foroohar said, noting that wearing less dirty laundry isn’t a pleasant feeling, but it might be better than the alternative.

Still, “could be worse!” is not the kind of phrase that winning bumper stickers are made of.

Democrats are starting to become more vocally opposed to the Fed’s actions.

“High inflation necessitates a response. But the concern is the Fed is doing too much too soon,” Hickenlooper wrote in a letter on Thursday to Fed Chairman Jerome Powell that Egan obtained. “We should wait to see the effects on the economy and how those changes are absorbed.”

But Egan notes the Fed is unlikely to change course.

“No matter how many letters Democrats write to Powell, the Fed chair has pledged to stay out of politics and base the central bank’s decisions solely on what is happening in the economy,” Egan writes. “The White House has repeatedly stressed it respects the Fed’s independence, a significant shift from the Trump administration.”

That means the Fed will probably continue to raise rates, at least this year, to cool the inflation that is already making people feel nervous.