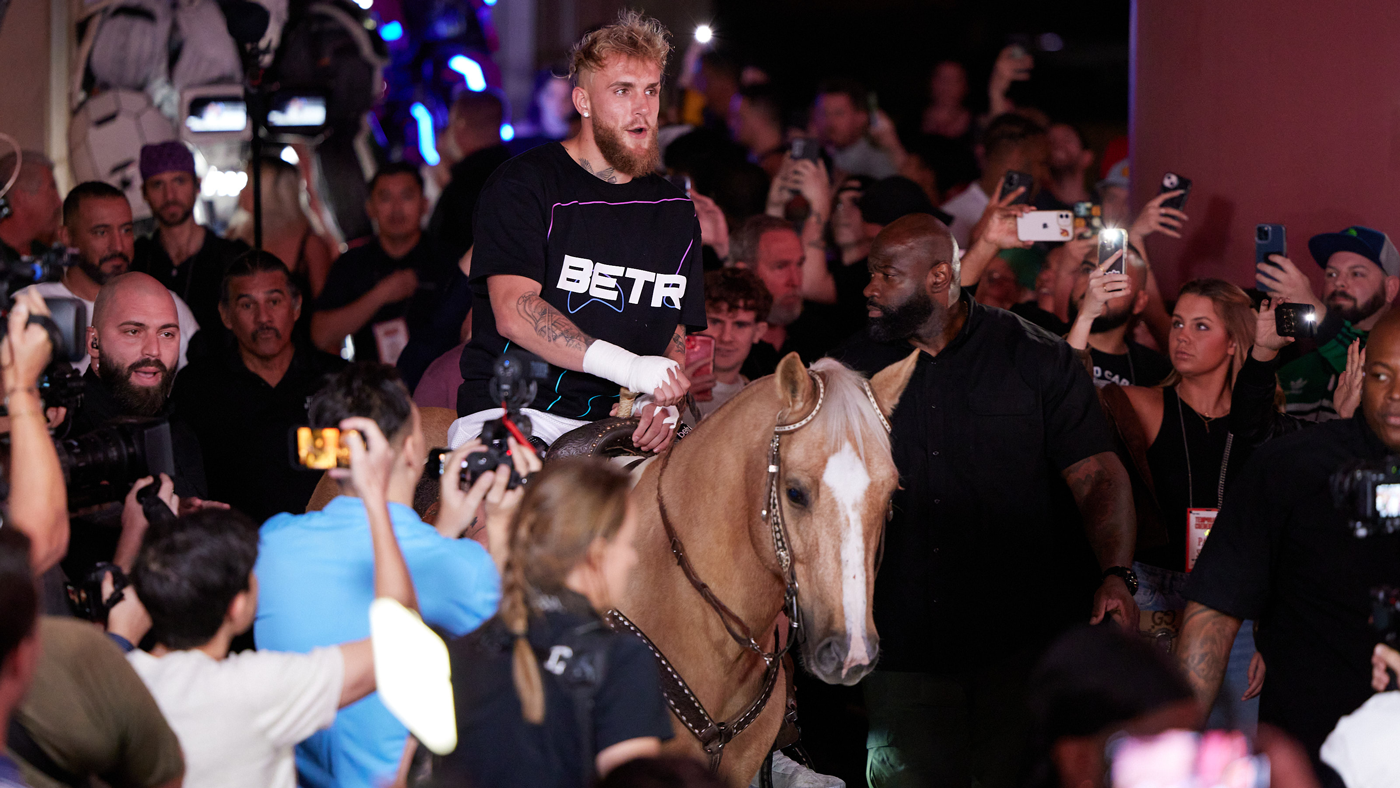 GLENDALE, Arizona – Riding into his own public workout by horseback, with a pair of comically large robots in tow, 25-year-old social media sensation Jake Paul looked anything but scared about the pugilistic challenge in front of him entering his pro boxing return on Saturday.

Shirtless and covered in tattoos, Paul (5-0, 4 KOs) worked himself into a light lather of sweat just days out from his eight-round bout set for a catchweight of 187 pounds against former UFC champion and MMA legend Anderson Silva (3-1, 2 KOs in boxing). The Showtime PPV main event (9 p.m. ET), which is presented by Paul’s Most Valuable Promotions, emanates from the Desert Diamond Arena just outside of Phoenix.

After scheduled fights against Tommy Fury (8-0, 4 KOs) and Hasim Rahman Jr. (12-1, 6 KOs) fell apart in recent months, preventing Paul from answering his critics’ loudest question of “when will you fight a real boxer,” the pressure was still on the native of Cleveland, Ohio, to find an opponent — on short notice, no less — who satisfies both the critical and commercial components that make up a successful pay-per-view promotion.

Enter Silva, the 47-year-old Brazilian star who continues to defy age, as evidenced by his split-decision upset in June 2021 of former middleweight titleholder Julio Cesar Chavez Jr. in Mexico. Only, unlike the narrative that everyone including UFC president Dana White continued to utter, Paul never hesitated in saying yes.

Just how difficult of a matchup to the 6-foot-1 Paul is the “Spider?” The betting odds have flip-flopped constantly throughout the build to the fight with Paul opening as the favorite before quickly yielding that spot, only to return once more just days out from fight night.

Asked by “Morning Kombat” following his workout on Wednesday whether his harshest critics’ assertion that the first loss Paul suffers will effectively end his boxing career full stop and send him packing, Paul was quick to disagree.

“I love this sport and I will always be in this sport,” Paul said.

To Paul’s point, the impact he has had on the sport in the two years and change he has been involved in boxing have gone well beyond his win and loss record.

As the face — alongside older brother Logan — of the recent celebrity boxing crossover trend, Paul has been responsible for introducing a younger fanbase to a sport that typically trends much older. And as a fledgling promoter, Paul has also opened wide doors for those within the sport — namely, in women’s boxing — who have long been overlooked like seven-division world champion Amanda Serrano.

MVP’s roster was only deepened by the signing of 18-year-old lightweight Ashton Sylve (7-0, 7 KOs), a top prospect who was courted by most major promoters, who will face veteran Braulio Rodriguez (20-4, 17 KOs) in Saturday’s co-main event.

Despite Paul’s recent run as a promoter, there is reason to question just how much his longterm success in that space is dictated by his own inside the ring. But that’s where Paul’s maturity, which can often be hidden behind his flashy style and trolling wit, seems to be one step ahead of those who doubt him.

“Don’t judge people by their wins,” Paul said, when describing what’s at stake for him against Silva. “Judge them by their losses.”

No, Paul isn’t predicting his own demise before he even fights against Silva. But even with a future superfight against Nate Diaz (who will be cornering teammate Chris Avila’s fight to open the PPV card) seemingly in the balance and potentially dependent upon Paul winning, the former Disney child actor isn’t willing to let any fear of what might happen get in his way.

The fact that Paul doesn’t fear defeat or being on the business end of the same kind of viral memes he launched with one-punch knockouts of Nate Robinson, Ben Askren and Tyron Woodley, might be the thing that has allowed him to achieve so quickly what has long been told to him to be impossible.

Paul is so brash, and seemingly so successful in each of his attempts to branch out into different lanes with such a high barrier of entry that it’s hard to imagine him as the embodiment of a living and breathing underdog. But the boasts he makes about how unique his boxing rise actually has been, including being on PPV for each pro fight despite not having an amateur career, it’s hard to disagree with him.

A huge part of Paul, and the childlike charm in which he employs just below the surface of his risk-taking and “Problem Child” persona, is the fact that he still views himself through the lens of a Midwestern kid from a blue collar background who disrupts everything he touches and will never quite be accepted into the country club.

In fact, Paul had yet another pinch me moment as he mounted the saddle of the horse that carried him to the ring in front of the adoring Glendale crowd who stopped by to watch him work out. Staring up at the video screens high above with his face on it and remembering that his brother Logan is only one month away from headlining WWE’s Crown Jewel against Roman Reigns, Paul could only shake his head.

“It doesn’t make any sense,” Paul said. “I looked up and just giggled. This couldn’t get any more surreal.”

Despite all of his romantic bliss, it’s still hard to imagine the potential of a one-sided or knockout loss being anything but damaging to his commercial future as a PPV brand. In that regard, this fight feels like Paul’s ultimate “put up or shut up” moment. Yet it’s a narrative Paul simply refuses to take a bite of.

It’s likely the same reason Paul continues to openly pine for a dream fight against boxing’s biggest active star, Canelo Alvarez, even though there isn’t a single person outside of Paul who believes he can win it. Like his brother Logan refusing to pass up the unthinkable opportunity of boxing Floyd Mayweather in 2021, if there’s a large enough dream that you are boldly willing to chase, regardless of whatever natural fears are attempting to talk you out of it, the idea of winning and losing takes on an entirely new meaning.

“I don’t think I can lose anything in life, I have already won at everything I have done,” Paul said. “Look at where I am at. I am 25, I wasn’t supposed to be here or accomplish this, at all. I was always the underdog and I was laughed at for my ideas, which seemed ludicrous. I have already won. I can already retire from just a couple of years of work and that means everything. My family is set and my kids’ kids’ kids will be all set. I’ve already won and everything else just seems to be a bonus.”