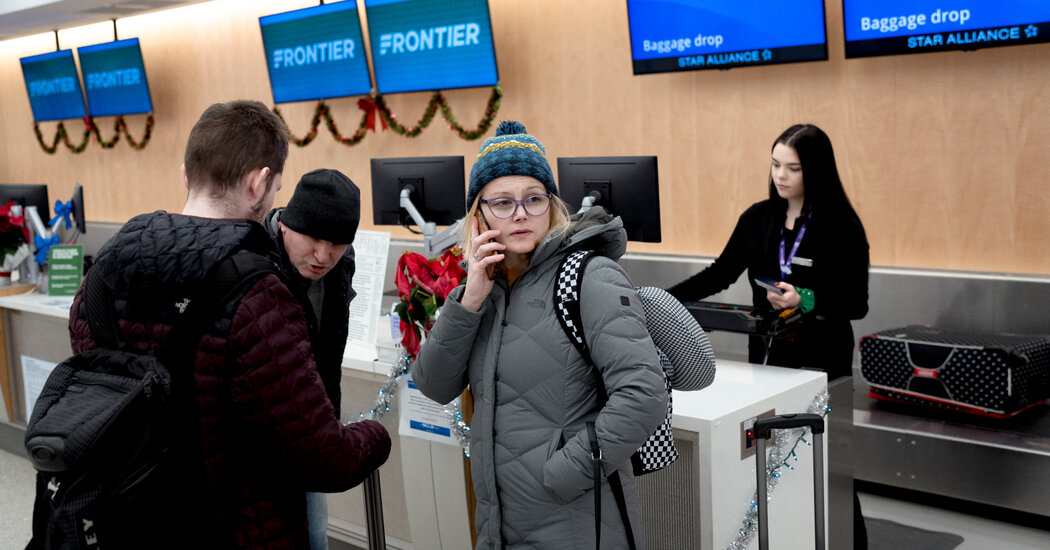 NASHVILLE — Much of the nation’s midsection is bracing for an extraordinarily brutal dose of frigid temperatures, blowing snow and high winds set to arrive just at the peak period of Christmas-season travel.

The combination of a rapidly intensifying storm system called a “bomb cyclone” and a large Arctic air mass will bring blizzard conditions and extremely dangerous wind chills to the Plains and Midwest, as well as a flash freeze and high winds that will disrupt travel across the eastern half of the country before the holiday weekend, forecasters said.

As the powerful storm approaches, the warnings have grown increasingly ominous. In Buffalo — where frigid temperatures and burrowing through snowstorms are facts of life — the National Weather Service described the coming event as a “once-in-a-generation storm.” Several governors have declared states of emergency as they warned residents of an array of hazards.

“This is going to be really dangerous,” Gov. Andy Beshear of Kentucky said in a news conference on Wednesday, before ticking through the litany of catastrophes that have struck Kentucky in his term. “After tornadoes and floods, pandemics, multiple ice storms just these last three years, I don’t want to lose one person to this Arctic front that’s coming through.”

Wind chills as low as 70 degrees below zero are possible in the High Plains and subzero to single-digit temperatures are expected throughout much of the Midwest, forecasters said.

In the Central and Southern Plains, a cold front is expected to sweep through the region from Wednesday to Friday, causing dramatic temperature declines of as much as 20 degrees within hours, which could bring flash freezes to roads, the National Weather Service warned. Light to moderate snowfall is expected in the Midwest, Great Lakes region and parts of the Northeast. The Great Lakes may see more than a foot of snowfall between Wednesday evening and Friday.

“Today is the first day of astronomical winter, and it will certainly feel like it for much of the nation through the end of this week,” the National Weather Service’s Prediction Center said on Twitter on Wednesday.

The winter storm arrives amid a busy week of holiday travel, toward the end of Hanukkah and extending through Christmas Day on Sunday.

“From Chicago and Detroit east to D.C. and New York and Boston, many airports will have delays due to deteriorating weather and winds,” said Greg Carbin, the chief of forecast operations for the Weather Prediction Center. “I imagine thousands of flights will be canceled ahead of time.”

Cities across the Midwest, including Cleveland and Peoria, Ill., prepared to open warming centers to allow residents to seek shelter during the storm.

Some Southern states are also bracing for the storm. In North Carolina, Gov. Roy Cooper signed a state of emergency on Tuesday to begin preparations for icy conditions, including low temperatures and high winds, expected to arrive on Friday and continue through the weekend.

In Texas, where a cold front is expected to bring single-digit temperatures on Friday, state officials assured residents that the state’s power grid could withstand increased demand. In early 2021, widespread power outages in the state amid freezing temperatures resulted in the deaths of nearly 250 residents.

“The grid is ready and reliable,” Peter Lake, the chairman of the Public Utility Commission of Texas, said during a news conference on Wednesday morning. “We expect to have sufficient generation to meet demand throughout this entire winter weather event.”