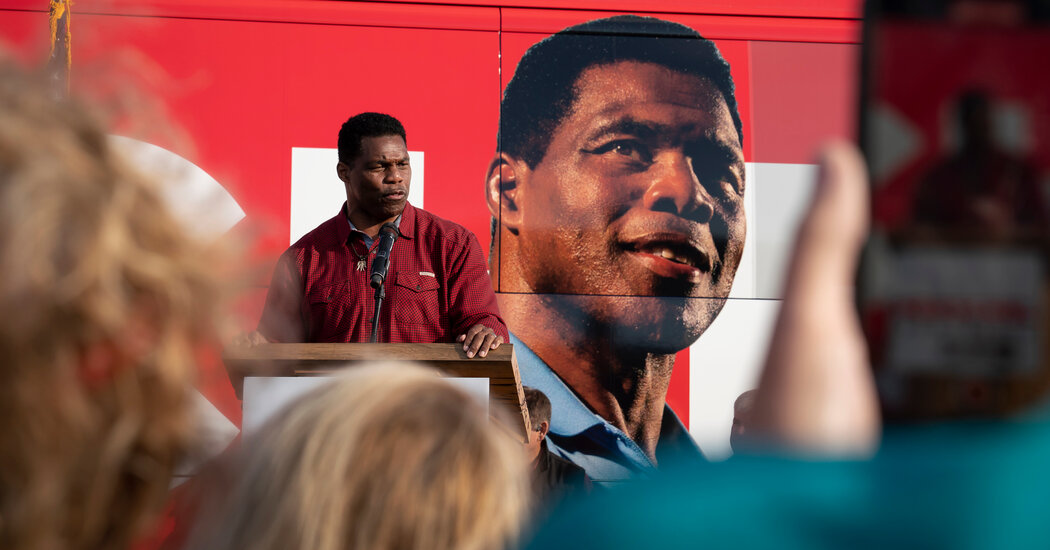 A woman who did not identify herself said on Wednesday that Herschel Walker pressured her to have an abortion and paid for the procedure nearly three decades ago after a yearslong extramarital relationship. A former football star, Mr. Walker is running for the Senate in Georgia as an abortion opponent.

The New York Times could not confirm the account, interview the woman or inspect the evidence Ms. Allred asserted was proof that the woman had a relationship with Mr. Walker.

The woman told her story at a news conference with Gloria Allred, the celebrity lawyer, but did not appear on camera. Neither she nor Ms. Allred offered any evidence to back up the woman’s accusation that Mr. Walker, a Republican, had urged her to end her pregnancy even after she initially left an abortion clinic without going through with the procedure.

The woman, speaking remotely into the news conference, said she was so traumatized in 1993 after she had the abortion that she left her home in the Dallas area and did not return for 15 years.

The woman said she was a registered independent who voted for Donald J. Trump, a Republican, in 2016 and 2020. She told her story, she said, to expose hypocrisy in Mr. Walker’s campaign message and because, she said, he lied in denying another woman’s account of his urging her to have an abortion by saying that he never signed cards with just his first initial, “H.”

Shortly before the news conference, Mr. Walker broadly denied the claim at a campaign event in Dillard, Ga., about 100 miles north of Atlanta.

“I’m done with this foolishness. I’ve already told people this is a lie and I’m not going to entertain it,” he said, suggesting that this was a reflection of Democratic jitters following his performance during the Senate debate against the Democratic incumbent, Senator Raphael Warnock, this month. “The Democrats will do and say whatever they can to win this seat.”

Just weeks ago, another woman said Mr. Walker had paid for her to have an abortion in 2009 and urged her to terminate a second pregnancy two years later. They ended their relationship after she refused, that woman, who also refused to be identified, told The Times in a series of interviews.

Mr. Walker, who denied that account, has anchored his campaign on an appeal to social conservatives as an unwavering opponent of abortion even in cases of rape and incest. He has since wavered on his policy approach to abortion, saying in September that he would support a measure from Senator Lindsey Graham of South Carolina that would ban abortion nationwide after 15 weeks of pregnancy and declaring his support during the Senate debate for Georgia’s new law that outlaws the procedure after six weeks.

A spokesman for Mr. Walker did not immediately respond to a request for comment on the specifics of the new claim.

Mr. Warnock’s campaign released a statement calling the new accusation “just the latest example of a troubling pattern we have seen play out again and again and again,” saying Mr. Walker has “a problem with the truth.”

Mr. Walker has been dogged by a series of potentially damaging reports about his personal life since he began his campaign for Senate in 2021. In June, The Daily Beast reported that Mr. Walker, who has criticized absentee fathers in Black households, had fathered a child out of wedlock. Later that week, the outlet reported on two more children he had not previously mentioned publicly or to his campaign aides.

Mr. Walker acknowledged an extramarital affair in his 2009 memoir, “Breaking Free: My Life With Dissociative Identity Disorder.” He described a relationship with a woman who lived in Irving, Tex., a Dallas suburb.

“I just want to convey that I knew right from wrong and I did a very, very wrong thing that hurt my wife, another person and in the end me,” he wrote.