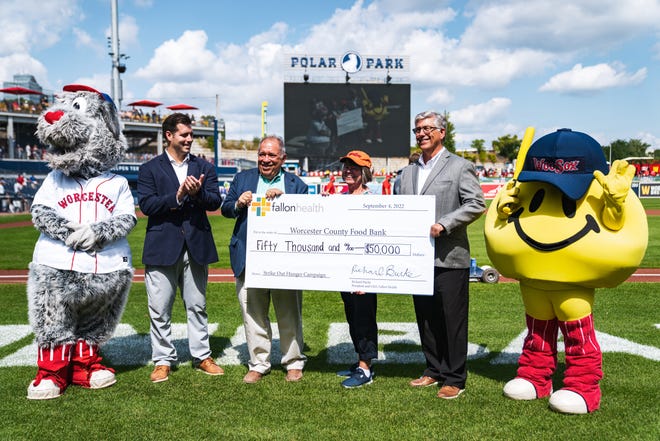 WORCESTER — When the Triple-A affiliate of the Boston Red Sox officially arrived here one of the first things the team did was hold a midwinter food drive in the midst of the COVID-19 pandemic at Worcester State University.

It was a huge success.

The line of cars seemed endless. Families in need of support were thankful. WooSox personnel braved the frigid temperatures and handed out food, water and supplies all morning and afternoon.

“Food and security, not just in Worcester, but every where became a big issue,” said Joe Bradlee, the WooSox vice president of baseball operations and community relations. “It’s symbolic of how the entire community comes together when problems arise.”

Worcester native, Red Sox legend and WooSox hitting coach Rich Gedman led the group of volunteers on Jan. 14, 2021. Gedman admitted at the time that the food bank meant a lot to his family when he was growing up on Lafayette Street, so any opportunity to give back felt important to him.

The WooSox have built a strong relationship with community partners since arriving in the Canal District, and it was on display again before Sunday’s game at Polar Park.

The WooSox and Fallon Health made a significant donation to the Worcester County Food Bank.

Fallon Health has donated $50 for every home-game strikeout thrown by a WooSox pitcher this entire season. So prior to Sunday’s game at Polar Park, Fallon Health presented a check for $50,000 to the Worcester County Food Bank.

“That check we presented was what we’ve raised to date, but we’re going to raise more money as the season wraps up here,” Bradlee said.

“It’s awesome,” WooSox pitcher Connor Seabold said. “Any time we’re able to help the community, it’s cool to make it happen. The fact that we’re leading the league in strikeouts makes it even sweeter.”

Entering Monday’s start at Lehigh Valley, Seabold had recorded 76 strikeouts, and he’s thrilled to be part of a program to help strike out hunger. Fellow starter Brian Keller leads the staff with 107.

Earlier this season, the WooSox brought a few of the pitchers to visit the food bank for a firsthand look, and maybe it served as motivation.

“It was nice to be able to show our pitchers the impact that they’re making when they take the mound and strike people out,” explained Bradlee.

The WooSox dedicated their pregame ceremony Sunday to striking out hunger in Worcester. The team recognized Worcester County Food Bank Executive Director Jean McMurray, who has worked tirelessly for 25 years to combat the hunger epidemic in the city.

During Richard Burke’s tenure as president and CEO of Fallon Health, the company has contributed more than $2.8 million to the cause. He was invited to throw out the ceremonial first pitch Sunday.

The WooSox also recognized Rosalee Pham, of Worcester, who is a clinical integration navigator for Fallon’s senior care options plan. Pham uses her skills as a bilingual speaker to provide care to Fallon members who speak Vietnamese. She also participated in the ceremonial first pitch.