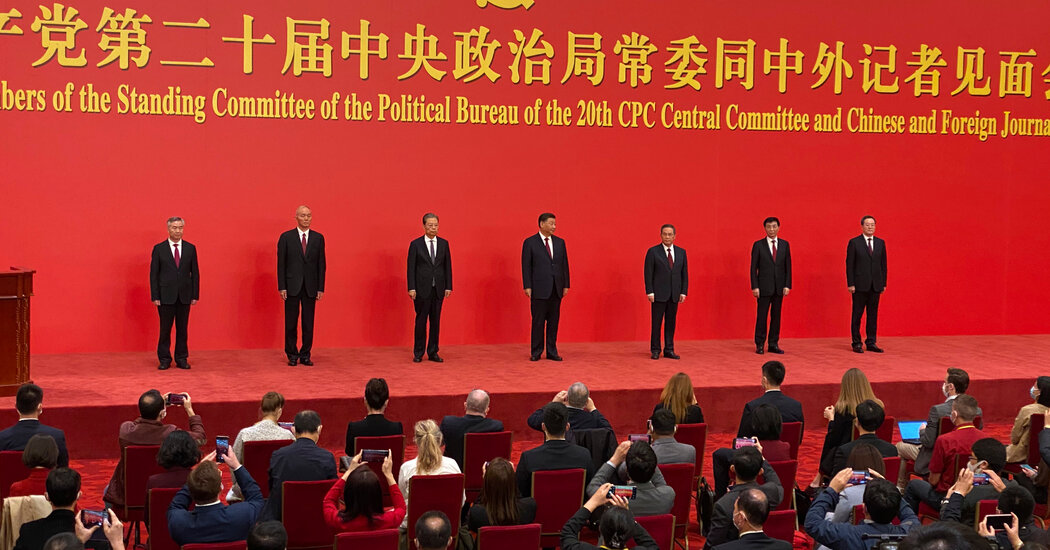 It was a moment packed with symbolism.

China’s frail former leader, Hu Jintao, who presided over one of China’s more open and prosperous periods, was shepherded out of the closing session of an important political meeting on Saturday, a rare disruption in a highly choreographed proceeding.

Mr. Hu, 79, was sitting in the front row next to his successor, Xi Jinping, when two attendants approached his table. One tried to lift him out of his chair, an effort Mr. Hu resisted. But then he stood up by himself, as the attendants continued standing behind him, while some of the senior officials nearby looked on in apparent concern.

After a brief exchange with the attendants, Mr. Hu, who appeared hesitant and possibly confused, said a few words to Mr. Xi, who gave the elder leader an expressionless nod, and Li Keqiang, who as China’s premier is the nation’s second-ranking official. Then Mr. Hu was led out of the hall.

Observers cycled through possible explanations: A positive Covid-19 test? Something else health-related? Or a scripted political gesture for international cameras to capture and frame?

The truth, like much else with Chinese politics, will probably never be revealed. But the timing, moments after reporters were allowed to enter the hall, was at least suggestive.

“Given how carefully these meetings are rehearsed and arranged, the fact that they let this happen in front of everyone, in front of the media, is the most important thing,” said Henry Gao, a law professor at Singapore Management University.

Last Sunday, in his keynote speech at the opening of the Party Congress, Mr. Xi went down a list of dissatisfactions, those accumulated during the decade before his rule. They included weakness in the Party, in the economy, and in national security, as well as the Party’s posture toward Hong Kong and Taiwan.

Mr. Hu, who led China from 2003 to 2013, represented a different, more open era. His leadership style was more consultative — the result of a balance of party factions in the top leadership. He also oversaw the Beijing Olympics and a decade of double-digit economic growth. China’s global reputation had improved, and the discussions on the internet were relatively free.

That has all changed under Mr. Xi. On Saturday, Mr. Xi hurried into retirement several senior figures of a more moderate political stripe, many of them former associates of Mr. Hu. They were replaced by Xi loyalists.

“It’s All the King’s Men now,” said Kaiser Kuo, a host of Sinica, a podcast on Chinese current affairs.